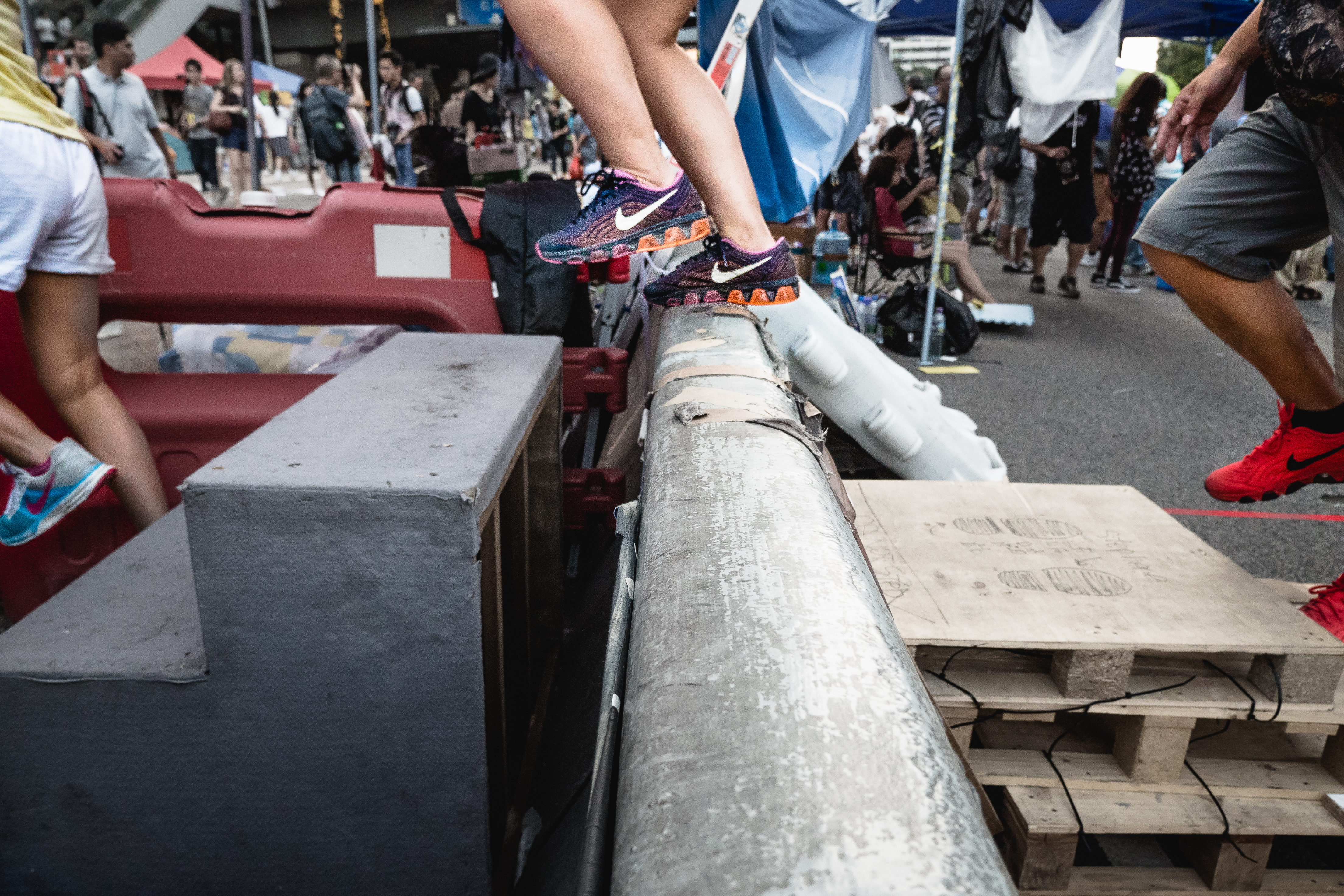 In 2012, Bill Ackman, a billionaire hedge fund manager, took a US$1 billion short position against Herbalife. “Has anyone ever purchased an Herbalife product?” he questioned in a 334-slide presentation beginning a four-year public battle to discredit the nutrition supplements provider as a multi-level marketing scam.

This year, he gave up as the stock just would not go down. It reached an all-time high of US$101.59 on April 6 ensuring heavy losses for Ackman-owned Pershing Square Holdings.

He should have just talked to Chris Lo in Hong Kong.

Lo, 36, freely admits he runs a multi-level marketing ring as a Herbalife distributor. Since 2012, the Malaysian has been running a fitness studio called WellnessXperts in Central. Wellness coaches bring clients for workouts selling Herbalife products through shakes and he claims to have over 400 individuals sourcing products from him.

These coaches offer a mix of nutrition advice, life coaching and fitness coaching to working professionals. Lo gets a commission for every product sold and the more people that work under him, the bigger his cut.

“I just believe in this multi-level marketing industry a lot,” he said. He started out in 2003 as a distributor in Singapore but realised that running a nutrition gym would make business easier. Instead of finding them on the streets, clients would come to him often brought by other distributors.

“WellnessXperts is mainly a business to facilitate an individual’s Herbalife business,” he said.

“We offer them a rate to use the space and operate as a coworking space.”

It’s difficult to get Lo to tell you details. Lo wouldn’t reveal exactly how much he earns or how much he spends maintaining three gyms in Hong Kong, Singapore & Kuala Lumpur. He did spend HK$60,000 to set up the space in Central.

Aside from the Herbalife business, Lo charges wellness coaches HK$2,000 in monthly rent and they earn their income by charging clients consultancy fees and organising group events.

An unused iMac rests in a corner with beige furniture, a set of lockers, five large glass mirrors and Herbalife products on the shelves creating a minimalist aesthetic. A group gathers for the “Lunch Club” and samples a powder blended smoothie made out of mint, kale, apple and banana costing HK$60.

Some of these customers do group workouts on weekday evenings or attend swimming or yoga sessions over the weekends. They send photos of their meals over Whatsapp, attend ten-day online weight loss challenges and do video conferences with their coaches.

Tsuei, 31, recently had a stint as a community manager at a business travel startup in Taiwan where she learnt more about Chinese medicine. She claims to have been overweight as a young child and now has a calling to help people.

“I think our supplements are wonderful and awesome. They provide a convenient, well-rounded, executable option for people who don’t have the option or ways to take care of their diet,” explained Tsuei.

Tsuei says she works with 30 clients based in Canada, Singapore, Hong Kong and Malaysia.

The duo work alongside Lo’s mother and four other wellness coaches. All of them desire to be their own bosses while helping others reach their wellness goals which they define loosely as a combination of fitness and psychosocial well-being. They jet regularly between Singapore and Hong Kong attending Herbalife training seminars.

Ackman did have a point. Lo’s team offers Formula 1, Herbalife’s signature 550 gram protein shake at HK$354 while at a store along Wyndham Street, a similar shake costs HK$189. Customers, many of whom appear to be in their 30s, said they would spend at least HK$1000 over similar products and attend five-session group workout programmes costing HK$280.

They would have paid an equivalent amount at a gym but they seem to be happy here. A board plastered with photos shows many individuals who have lost over 15kg in a year and they continue to take part in weekly activities after many years.

It is this pivot to an asset light lifestyle club model that has helped Herbalife hold its course amid the storm.

In 2017, its operations costed US$848 million whereas GNC shelled out double the amount at US$1.6 billion; GNC, the Pittsburgh-based fitness supplement provider, was in the red for the second year running reporting a loss of US$148.8 million operating 8,955 stores around the world. Meanwhile, since Ackman’s presentation, Herbalife has posted an average quarterly profit of 6.1% over the years.

Ackman was also wrong to assume that Herbalife was purely earning through nefarious recruitment methods. In Fortune, a major investor is quoted as saying “it’s impossible to argue there isn’t a product.”

Much like Apple, Herbalife built a brand and an ecosystem that proves alluring to end customers justifying its high price. It has sponsored over 100 celebrities with Portuguese football player Cristiano Ronaldo and India’s national cricket team captain Virat Kohli among the list.

While Herbalife does not operate brick-and-mortar stores offering a conventional consumer good, perhaps it parlays hope. Lo’s team give clients a hope of a healthier future and they are happy that someone with a compelling mystique is invested in their goals.

For their part, the coaches get a support system that helps them build a career in health consulting – not every coach has formal qualifications although Lo’s roster does include martial arts trainers, yoga coaches and swim coaches.

It’s why other investors took the other side of the bet. Longtime rival Carl Icahn, according to Fortune, ended up owning 18.4% of Herbalife’s stock with Soros Fund Management joining shortly afterwards showing how moral unease over a predatory business model did not make for sound financial judgement on Ackman’s part.

His hubris did help in one way. Ackman’s high-profile antics caught the attention of the Federal Trade Commission (FTC) which completed an investigation into the company in 2014 and ordered it to pay US$200 million in damages to over 350,000 individuals.

“The settlement … requires Herbalife to eliminate the incentives in its current system that reward distributors primarily for recruiting,” the FTC said in 2016.

Lo is now finding it difficult without those incentives. He is struggling to recruit individuals who might not be happy with a low-paying and uncertain income stream in Hong Kong.

“The challenge again is that in Hong Kong, the average salary is higher,” he said. (Update: He claims that otherwise his methods work fine in Southeast Asia and he has a viable business proposition.)

His wellness studio in Hong Kong is currently not earning any profits. In Singapore, Lo claims that wellness consultants can live comfortably on a US$1,000 income allowing him to secure long-term employee commitment.

“We are not recruiting strong enough and not expanding fast enough [in Hong Kong],” he added. “In Singapore, the housing situation is a lot better so a lot of people don’t have to pay much for rent.”

While Hong Kong has a pyramid scheme prohibition ordinance and Singapore has a Multi-Level Marketing and Pyramid Selling (Prohibition) Act, Lo, one of just two Herbalife distributors in the city, seems to have escaped the scrutiny of the authorities as he doesn’t offer financial incentives to get individuals to join their community. Instead, he tries to get customers that are motivated to stay on to join him. They have to buy Herbalife goods but at a discount.

“When our customers get results, they refer two customers, they become ambassadors and we can offer them a cheaper price,” Lo explained.“Our customers end up being the best ambassadors or wellness coaches although they might not want to do the business.”

“Why don’t you become an ambassador?” he said before we parted ways at a subway station.