Gobi Partners: Beyond the oasis 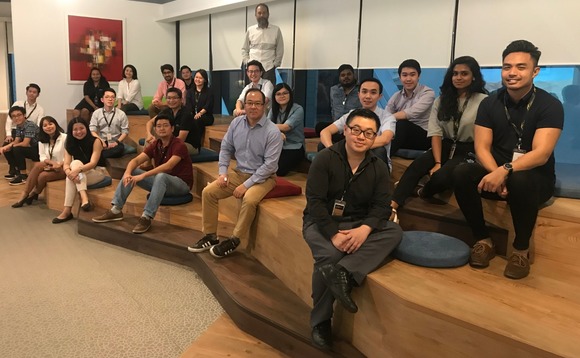 This was a 2,000-word feature for AVCJ focusing on China and Malaysia-headquartered venture capital firm Gobi Partners, a firm with an eighteen-year history

China’s Gobi Partners has grown from a four-person team to an 11-office franchise. The coming decade will test the VC firm’s aspiration to become a pan-Asian enterprise

Thomas Tsao is a storehouse of memories. The only founding partner still actively involved at Gobi Partners, the affable American from Long Island remembers the 1997 Hong Kong handover, the tumult of the Asian financial crisis, the riots that toppled Indonesian dictator Suharto, and the experience of being quarantined in the US while trying to raise capital amid the SARS pandemic.

Back then, few foreign or local VC funds wanted to invest in China – a promising if somewhat risky investment destination that made more sense as part of a broader regional allocation. Launching Gobi in 2002 with two other partners, Tsao sought to help enterprising Chinese entrepreneurs, many of whom were new to the game.

“I remember taking some of our company founders to Sand Hill Road [in Silicon Valley] and they would put on their best outfits – ill-fitting suits worn with black leather shoes and white socks,” he recalls. “The first thing we did after raising money was get them to dress differently.”

Gobi could have been christened Malibu Partners. A sandy location was picked because the partners believed entrepreneurs are essential for the development of a technology ecosystem but hard to spot – much like silicon, a key component in semiconductor production, which is found in sand particles.

The timing was bad for that debut fund; it launched on the day the Iraq war began. Moreover, LPs that had been jolted by the collapse of the US dotcom bubble were wary of a repeat experience in China. It took Gobi three years to close Gobi Hi-Tech Fund at RMB425 million ($60 million). “We also went in when nobody thought Chinese entrepreneurs could be innovators. A lot of people from the US or Europe were dismissive of whatever came out of China. They thought Chinese companies were only good at copying,” Tsao says.

Nevertheless, anticipating improvements in internet infrastructure, Gobi bet on digital start-ups. Digital Media Group (DMG), a video equipment and content provider for urban subway networks, was an early investee. It won plaudits from commuters and commercial partners for a 40-episode series of two-minute shorts featuring pop star Huang Xiao Ming. Watched by a captive commuter audience in an era before smart phones, DMG was advertising in a way no one had done before. A $125 million trade sale exit came in 2009.

Four successor funds have continued to identify and support local ventures, many of which are situated outside the main start-up hub of Beijing. These include workforce collaboration app Teambition, online travel platform Tuniu, second-hand car trading site Chezhibao and Australian cross-border payments service Airwallex, which counts two founders of Chinese heritage. Teambition founder Junyuan Qi, then an undergraduate, recalls being sought out by a Gobi partner who was an avid user of the beta version.

Fund II, the firm’s first US dollar-denominated pool of capital, which closed at $150 million in 2008, failed to meet expectations due to the global financial crisis. Gobi switched back to renminbi for its next China vehicle. A final close of RMB350 million came in 2012.

Gobi’s first foray into Southeast Asia was essentially a response to this difficult fundraising environment. The Singapore government was willing to seed professional GPs as part of efforts to jumpstart its venture capital ecosystem, so the team seized on the opportunity. In 2010, Singapore’s Media Development Authority appointed Gobi manager of a S$100 million fund. Kay-Mok Ku, a local entrepreneur-turned-investment executive at media conglomerate MediaCorp, was recruited to manage investments in the region.

Ku concedes Gobi was a bit too early because smart phone and internet penetration were not at the same level as China. Moreover, the mandate to invest only in digital media companies meant opportunities in e-commerce and mobility could not be pursued, while attracting institutional LPs was difficult. Few were active in Southeast Asia VC at the time and Gobi had no track record in the region.

“It was a bit frustrating in the early 2010s because the VC ecosystem just wasn’t that ready, the deal flow just wasn’t there,” says Ku. “With the more recent funds, we have seen a turnaround. It’s a confluence of factors – the market is ready and start-ups have cross-border ambitions.”

It represents a departure from the early-stage remit that Gobi previously fiercely protected, but there is a recognition internally of the need to experiment in different segments. Ku observes that there is increasing competition for seed and early-stage deals from local and regional peers.

With Tsao concentrating on Southeast Asia, Michael Zhu stepped up as managing partner responsible for China. He had already been with the firm for more than a decade, having been recruited fresh out of university in 2003. “I remember interviewing him and his QQ [instant messaging] name funnily was ‘Michael Bryant’ [like the late NBA star Kobe Bryant],” Tsao recalls. “I asked him, ‘How good are you?’ He said he was the best at his college. I used to play back then and… yeah, he definitely was.”

Zhu is supported by two partners, Wing Hu and Chibo Tang. The trio came to the fore as Don Jiang, Wai Kit Lau and Ken Xu scaled back their involvement due to retirement and commitments related to family office management. Tang actually left the firm once only to return; he observes there is room for career growth at Gobi that he would not likely find in a consulting role with the likes of McKinsey & Company.

China remains a crucial part of the overall business, accounting for more than 70% of its $1.1 billion in assets under management. Gobi uses renminbi-denominated funds for early-stage opportunities and brings in US dollar vehicles for larger-ticket transactions. In 2015, the team closed its largest local currency fund at RMB600 million. A majority of Gobi Fund III’s $150 million corpus went into Chinese start-ups. Zhu is now raising Gobi’s latest China-only US dollar and renminbi vehicles.

As for investment activity in the country, the firm is moving towards enterprise-facing start-ups. “From 2011 onwards, we saw a bubble in the consumer space,” Zhu says.

Considerable effort is devoted to identifying and realizing synergies between portfolio companies in China and Southeast Asia. Gobi’s initial expansion was in part driven by a recognition that established trends in one market were beginning to play out in the other. Ironically, Chinese start- ups once chided for being copycats can now help Southeast Asian counterparts “copy from China.”

“A lot of start-ups say in their fundraising statements that they would like to expand quickly but it’s not easy,” states Eric Cheng, co-founder of Malaysian used car-trading platform Carsome. “In China, some of the Gobi companies expanded to 50 cities within three months. We learned from them how to do it in a sustainable way.” Gobi facilitated exchanges between Cheng and Chezhibao founder Lee Huang and the two companies ended up trading notes on pricing strategies. 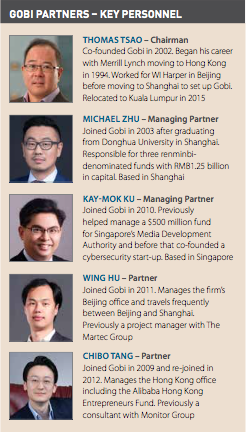 Christina Suriadjaja, founder of Indonesian property management platform Travelio, adds that she learned much from Tuniu during meetings at Gobi’s annual general meeting in Nanjing in 2016. Back then, the idea for her company had not fully materialized, so Gobi’s Jiang assigned homework – reading up on several Chinese hospitality start-ups.

However, Suriadjaja adds that Chinese start-ups operate in a more aggressive manner. For instance, Tuniu targeted rapid growth in second-tier cities with a property management arm snapping up assets. Travelio is growing at a slower pace due to lower disposable incomes in Indonesia and does not anticipate much demand in tier two cities. “If I did what Tuniu did, I don’t think we would be alive right now,” she says. “It was definitely helpful, but execution ultimately depends on the entrepreneur and their specific situation.”

Gobi is not alone in pursing China-Southeast Asia synergies. Larger China-focused players such as Qiming Venture Partners and GGV Capital have opened offices in Singapore, while numerous other firms operate on a fly in-fly out basis. According to AVCJ Research, China oriented venture capital investors participated in 35 deals in Southeast Asia last year, up from eight in 2015.

Gobi argues that it stands out from the pack by virtue of its 11-office network and track record of exits in the region. “They enter early and quite often exit through a trade sale. They don’t try to earn the maximum they can but deliver a stable and satisfying return,” says Liyong Zhou, a general manager in the VC unit under Shanghai STVC Group, one of China’s earliest state-backed LPs for venture funds. In Southeast Asia, Gobi claims to have achieved seven exits.

Gobi has leveraged its local presence in Indonesia, the Philippines, Pakistan, and Malaysia to raise single-country funds that scoop up seed-stage deals. However, the firm’s ambitions do not stop there. Gobi wants to use its Malaysia base as a potential conduit within the Islamic world, while the Tokyo team makes overtures to Japanese companies seeking partnerships in Southeast Asia. There are plans to open in Riyadh in Saudi Arabia as well.

Working with multinational corporates has long been part of Gobi’s DNA. LPs in Fund I included IBM, NTT DoCoMo, McGraw-Hill, and Disney’s Steamboat Ventures. In 2015, the firm brokered a deal with the Alibaba Foundation to manage the HK$1 billion Alibaba Hong Kong Entrepreneurs Fund.

The evergreen vehicle arose out of a desire to create more job opportunities for young people in the city. Aspiring virtual bank WeLab, logistics platform Gogovan, e-commerce enabler Shopline, and cooking-based lifestyle platform DayDayCook are among those that have since received funding. “When I moved to Hong Kong four years ago, all my friends doubted whether there could be entrepreneurial projects in Hong Kong. Four years later, seven to eight unicorns have emerged,” says Gobi’s Tang.

Jack of all trades?

However, there is a danger that all this disparate and decentralized investment activity could stretch the VC firm thin. Whenever GPs push aggressively into new geographies and strategies, it always raises concerns internal culture will fray, investment discipline will lapse, and teams will fracture. In addition, efforts to drive synergies between these various moving parts – the very reason for expansion – could flounder.

Like most of its peers, Gobi has seen team members spinout. Two years ago, Victor Chua, a vice president based in Malaysia, departed to form Vynn Capital, a venture capital firm that claims to pursue technology opportunities at the nexus of travel, property, consumer goods, and female economics.

These industry dynamics put pressure on Gobi’s leadership to maintain cohesion, but they believe the firm can become that rare early-stage Asian GP with a multi-regional presence. “We may have started in China, but I don’t think we are a Chinese VC firm,” says Singapore-based Ku. “I think there’s a shot at becoming a homegrown pan-Asian VC fund.”

To that end, Gobi has invested heavily in the last two years to expand headcount in Southeast Asia, including female partners and professionals focused on environment, social and governance (ESG) issues. For example, Thailand-based former entrepreneur Shannon Kalayanamitr was recruited as a venture partner. Several hires reflect the firm’s intent to invest more in healthcare, agricultural technology and advanced manufacturing.

In the end, Tsao believes it will all work out because Gobi has a clear long-term vision that is almost impact-oriented. “We believe great entrepreneurial talent is evenly distributed around the world but access to opportunity is not,” he says. “We don’t operate just to make institutional LPs happy. We do things that we think will create the value that needs to be created.”