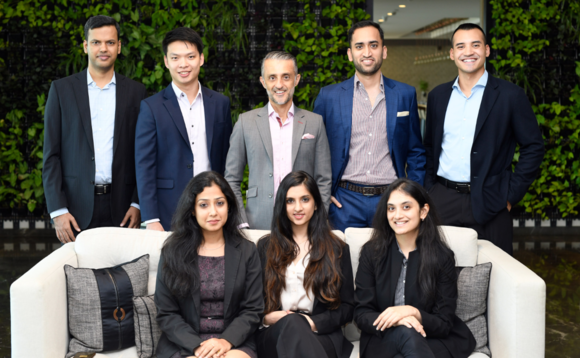 This was a 2,000-word feature for AVCJ focusing on Singapore-headquartered VC firm DSG Consumer Partners that specializes in backing promising Indian consumer brands.

Deepak Shahdadpuri, co-founder and managing director of DSG Consumer Partners, likes to consider a fledgling brand’s potential well beyond the horizon envisioned by the entrepreneur. “He thinks where this product or business would be 10 years from now,” says Rohan Mirchandani, co-founder of India-based Drums Food International. “Building a brand can unlock some serious value over time but it won’t happen overnight. He has the vision and knows that it’s going to take time.”

Mirchandani has experienced that foresight firsthand. He was running an ice-cream brand when he first met Shahdadpuri. The latter was not bullish on the prospects for the business but was much more excited about another idea Mirchandani was mulling – fresh Greek yogurt. Drums Food duly changed tack, and in 2016, received INR 445 million ($6.2 million) in Series A funding from DSG. Verlinvest, an investment rm established by the founding families of Anheuser-Busch InBev, and an LP in DSG’s second fund, came in as a co-investor.

As one of few India-focused investors that has supported – over multiple decades – entrepreneurs seeking to build premium yet localized brands targeting consumers in urban markets, Shahdadpuri’s reputation often precedes him. This has made DSG a sought-after partner for seed and early stage rounds, in the expectation that not only capital will be provided, but also mentorship intended to fast-track growth.

Shahdadpuri was among the first investors in the nascent consumer-centric venture capital community. The decision to back Sula Vineyards, India’s leading wine producer, in 2004 is often cited in common circles as an example of his prescient yet contrarian investment approach. “The lesson from Sula was the opportunity is very real,” says Shahdadpuri. “It is not impossible for a new unknown brand in a category which is not traditionally Indian to start, build and become a market leader.”

Back then, Shahdadpuri, a former Bain & Company consultant in London, was managing GEM India after a stint with Reuters Venture Capital – the latter role began in 2000 leading to the serendipitous opportunity to invest in India although he was tasked with studying technology. It was with GEM India that Shahdadpuri spotted an opportunity to invest in the less competitive non-tech consumer segment where founder-entrepreneurs had little venture capital support.

“It was a small fund – $16 million – focused on backing young consumer brands,” Shahdadpuri says. “From that portfolio, we invested in Sula Wines, Saffronart, Cleartrip, Baker’s Circle and Capco, all of which turned out pretty well.”

After a six-year period with Beacon India, a mid-market buyout fund, Shahdadpuri opted to get back to doing what he enjoyed best – investing in early stage opportunities in the consumer sector. Launching DSG in 2013, he deliberately chose the word “consumer,” marking himself out as a sector-specific fund manager as he believed there were enough opportunities for a diversified investment portfolio.

Even though the opportunities were there, it was difficult raising capital because LPs were wary of such a focused thesis. Fund I closed at just $12 million, with another $13 million raised later through co-investments. Success came quickly through Mswipe, a point-of-sale solutions provider, ZipDial, a missed call-based marketing tool acquired by Twitter, and Oravel Stays, a branded hotel manager now known as Oyo Rooms. Fund I has so far delivered distributions to paid-in (DPI) of 3.7x, with three full exits and two partial exits. The total value to paid-in (TVPI) is 9.8x. Further exits are said to be in the pipeline.

“Fund I has multiple hits. It must be one of the all-time greats and has to go down in the hall of fame somewhere,” says ArjunAnand, a principal at Verlinvest. The firm was sufficiently impressed to anchor DSG’s second fund, which closed at $50 million in 2017. This followed The Everstone Group’s acquisition of a 50% stake in DSG, which included an agreement to provide back office facilities to Shahdadpuri’s three-person team.

“If I have one piece of advice to give you – I don’t know how but please convince Deepak Shahdadpuri at DSG to give you money,” Viraj Bahl, Veeba’s co-founder, told a roomful of aspiring entrepreneurs last year. “If you can, you will be doing yourself the biggest favor.”

The mild-mannered Bahl is effusive in his praise for the minority investor because he says he appreciates Shahdadpuri’s founder-centric attitude. Shahdadpuri brought Verlinvest to the cap table during a credit crunch yet the capital was provided at a fair valuation, Bahl says. He also claims to have bene ted over the years from Shahdadpuri’s business-savvy counsel.

“I think there’s really nobody who understands the nuances of an early stage company as well,” adds Drums Foods’ Mirchandani in agreement. He adds that, on numerous occasions, a quick phone call to Shahdadpuri’s has resulted into operational assistance sourced through his strong networks encompassing more than portfolio companies.

While the founder’s influence still looms large over DSG, the firm is not a one-man team. Last year, Hariharan Premkumar, formerly of Peepul Capital, was brought in as head of the India office. Much like Shahdadpuri, Premkumar was at a mid-market buyout fund earlier in his career and finds seed investing a refreshing challenge. He notes that DSG’s reputation and referrals from founders make for a ready source of deal flow but the rising number of players in the same field means they now actively study a “white space” map – consumer categories that do not yet have a clear leader.

The team of seven analyzes emerging business models in the US, Australia, UK and Singapore, seeking to replicate success stories in India by finding suitable founders. Investments are often at the pre-seed level. “It definitely helps us from a sourcing standpoint. That’s how we make a call on the ‘not-yet’ opportunity,” says Premkumar. “We are probably the only ones that are still open to investing in businesses at a really early stage.” This process has led DSG to back companies in the mother and baby, pet food, low alcohol or no alcohol, cold brew coffee categories, among others.

Once an investment closes, the firm spends the first two years working with the company on ironing out common wrinkles in the path traversed by young start-ups. These include the need to recruit functional leaders, establishing realistic stretch targets, building a brand narrative, localizing products, and organizing social media brainstorming sessions to ensure a strong presence online. The objective is to reduce the stress on solo founders who can often feel like it’s them against the world. 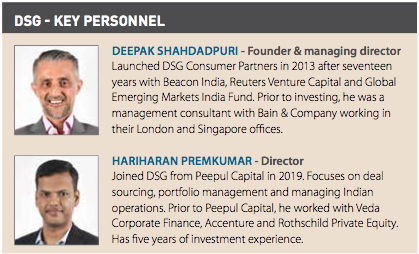 Increasing internet penetration has proven to be a blessing, exposing Indians to outside influences while giving companies an opportunity to market their products cost effectively. However, DSG is keen to reassure founders that the rise of technology-enabled business models doesn’t mean that its patient investment philosophy will be jettisoned in favor of pursuing high-cash burn growth models. The firm exited Oyo last year through a buyback by founder Ritesh Agarwal because it was clear the company had a different approach.

“It is really important that consumer businesses are built in a very capital efficient manner because that is how you still make the returns work despite a lower growth trajectory,” adds Premkumar. “That is an aspect where we watch them like a hawk.”

Over 70% of Fund II has now been deployed. A third fund closed last year at $65 million, accompanied by a second buildout fund – with a corpus of $50 million – that will support portfolio companies in their early expansion stage. DSG raised $20 million for its first annex vehicle in 2017. Fund III was oversubscribed but Shahdadpuri claims to have stayed loyal to his early group of LPs.

Meanwhile, the steady but unspectacular increases in corpus size with each vintage reflect the fact that seed opportunities don’t require checks beyond $1-2 million. It allows DSG to maintain its focus on finding brands relevant to an increasingly urbanized India. “Many categories in India don’t exist,” says Shahdadpuri. “We only do one thing, which is identify categories where we believe we can build a number one or number two brand.”

There has been a marked shift away from pure technology-based services businesses as well. Recent investments have focused on companies that produce tangible physical products. Across the funds, DSG has made seven investments in service-based online businesses. In the last three years, only one such portfolio company has been added – Leverage Edu, an online university admissions counselor.

The intensifying competition identified by Premkumar is visible in the investment philosophy of Fireside Ventures, Sixth Sense Ventures and Sauce. The consumer-focused units of generalist VC players like Sequoia Capital India, Accel Partners and Nexus Venture Partners have also upped their involvement in the same space.

Shahdadpuri maintains that it’s not easy to understand the urban consumer because behavior is constantly evolving, so there will always be openings for a keen observer. It comes down to gauging the impact of demographic change, the emergence of generation Z as the prevalent consumption force in place of millennials, and disruption driven by technology. Even if DSG’s rivals grasp the dynamics and identify local brand leaders, there should be plenty of opportunities to go around.

“The big lesson is there is no one market,” he says. “Some people care about the planet, some people don’t, and you can’t change them. What we do is try and understand the psyche of the consumer, we try to identify the strongest drivers and then try to back brands that are developing products for those buying decisions.”

With assets under management doubling in the last couple of years, DSG must continue to develop its market footprint and skillsets. Additions to the team are expected, not least to address concerns that the firm amounts to no more than Shahdadpuri’s networks and persona. “He has gone from managing a relatively small amount of money in Fund I to more money,” says Verlinvest’s Anand. “As this curve evolves, he’s grooming people to become partners, which I would say is the natural course of things.”

Exits will also become a priority as the firm looks to turn more of Fund I’s impressive paper gains into cash. DSG is not alone in facing this challenge – Anand says it is in no worse position than anyone else – as investments increase in number and portfolio companies grow in size. Ultimately, it is not only the firm’s knack for spotting emerging consumer trends that will be put to the test, but also its ability to pick companies that offer a logical path to liquidity.

Not all private equity firms will be successful in this endeavor, but Mirchandani trusts in Shahdadpuri’s experience. “He understands a lot of crazy stuff that happens early on. He’s not alarmed,” Mirchandani says. “He’s seen it all so it’s good to have someone on board who’s gone through all that madness.”