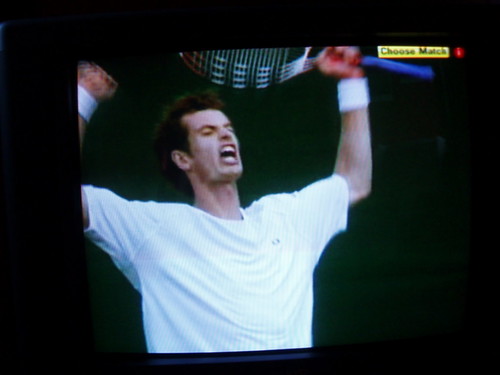 As a bleary eyed young reporter, I wrote this throughout the night so that it could be ready for the morning in Asia. (See archived version here).

It’s done. Murray, the great hope of British tennis, has finally fulfilled the annual expectations thrust upon him to win at SW19.

The moment they had all been waiting for happened just three hours, nine minutes into the final.

And the overpowering emotion was that of disbelief.

Not until Djokovic had netted a backhand, and Murray stumbled to the ground on what was his fourth championship point, had the crowd fully realised the importance of the moment. Almost everyone had expected Djokovic to mount a fightback, especially after the Serb went 4-2 up in the third, and they were entirely unprepared for the swift end to the proceedings.

They didn’t have to endure a five-set match for the kid from Dunblane to get a chance to run over to his mother, Great Britain Fed Cup captain Judy Murray, and celebrate the end of an unbelievable fortnight in the Royal Box.

But far from merely being a one-year wait to be crowned the Wimbledon champion for 2013, his journey actually began nearly eight years ago when the Scot first rose to prominence by defeating Sergiy Stakhovsky in the 2004 US Open juniors’ singles final (the Ukrainian came to his aid this year by dumping Roger Federer out of the tournament), just as Britain’s previous big hope – Tim Henman – was entering the twilight of his career.

This time last year, emotions had gotten the better of Murray as well as he broke into tears after losing to Federer in the final.

12 months ago, the country that holds the most prestigious of the four majors mourned along with Murray as he came so close but failed in his bid to end what was then a 76-year drought.

However, the defeat only seemed to have sharpened the player’s resolve and he came back stronger in the US Open months later, defeating Djokovic in an epic four hour, 54 minute final.

It was the fifth grand slam final of Murray’s career and even Djokovic, a friend of Murray’s since the age of 11, was happy to see him succeed.

Many have justly remarked that Murray should not have had to wait so long for his first grand slam. The Briton has had the misfortune of playing in an era blessed with the talents of three supremely gifted players in Federer, Djokovic and Rafael Nadal.

Over the years, Murray found it as difficult to conquer Djokovic’s aggressive hitting as he did with Federer’s masterful baseline play. On the few occasions he got the better of the duo, he failed to find an answer to Nadal’s industry and never-say-die attitude.

Murray is not the first sportsman who had to struggle to thrive within a competitive environment. In cricket, for example, Rahul Dravid faced similar questions towards his aspirations to reach the zenith of his craft as he was continuously compared with the mercurial Sachin Tendulkar. But nevertheless, the Wall soldiered on with each match and Murray continued to believe in his grand slam hopes.

Moreover, the 26-year-old, much like many a sportsman, has taken some time to better understand his weaknesses and hone his strengths.

Murray himself remarked that much of the credit for this transformation has to go to Ivan Lendl, who himself underwent a trying time during his professional career.

“There’s not been one radical change [with Lendl],” he said. “A lot of it is minor details. But if you pick 10 small things to work on and change, that can turn into a big difference.”

The small changes were carried out by a remarkable team who have been dedicated to Murray’s success. Fitness coach Jez Green, in particular, has put Murray through a punishing fitness regime, often in the baking heat of Miami, and has the player on a strict diet that can often include up to 50 pieces of sushi in one meal.

The mental and physical training that Murray has endured has helped him gain the edge to make the reality of a British winner at Wimbledon possible.

Did Murray face a below-par Djokovic?

The above question has still been asked by many who do not credit Murray as a true champion.

The short answer is yes.

The Serbian gave away eight break points in the first set alone, he produced 40 unforced errors that were almost double the tally of Murray’s 21 and generally looked tired and unwilling to run as hard as Murray could.

Despite insisting he would be on top form, the Serbian’s record-breaking semi-final against Juan Martin del Potro looked to have taken its toll. Djokovic used drop shots with increasingly regularity in the third set, perhaps to shorten the exhausting rallies as he tired. Murray looked fresher in the summer heat and moved with more vigour as the match came to a close.

But does that undervalue Murray’s win? I don’t think that the hours he put in during training in order to have a shot at achieving success at Centre Court should be disrespected by such a suggestion.

The best summation of Murray’s winning mentality during the match came from musician Sir Cliff Richard who told Sky Sports: “I think Andy played for himself. He was masterful all the way through and even though he had those moments when he was down, he broke back [and] won his own serve.”

“In the last game I knew that Djokovic was going to be trouble because he doesn’t give anything away and it was just very exciting to eventually watch him finally pull it off.

“It was just fantastic for all of us but I’m hoping that he [Murray] feels really good about himself and then we can enjoy his winning.”

Murray had himself expressed his annoyance at the media hype that surrounded his every move and it appears Lendl and his team have helped the 26-year-old blot out all the distractions.

It was this, as well as an immense amount of self-belief, that played a part and it would be wrong to focus on Djokovic’s lethargy.

After all, wasn’t it Murray who failed to show up in January’s Australian Open final when Djokovic’s water-tight serve – the Serb was not broken once in four sets of intense baseline brutality – was praised but few gave the Scot his due?

What next for Andy Murray?

Murray may have been the home favourite but he has yet to really assert himself and expand tennis’ big three to include an additional member.

He can consider himself to have earned a fortuitous straight sets final victory but any future opportunities will be more like last year’s US Open battle instead of Sunday’s brief contest.

As much as the media would like to script the ‘rise of a legend’ story, Murray has to improve upon many aspects of his game and define his identity.

Djokovic is well-known as an artist of comebacks while Nadal punishes opponents on clay surfaces; Federer has already made a name for himself as the classiest act on Wimbledon. Murray, on the other hand, still has a story to tell and he’s only written the introductory chapter.

Sport has always loved the underdog, though, but now Murray has the chance to go beyond that tag. For now, the world will be perfectly happy to dwell on the relief experienced by the masses after the culmination of a long wait for a home champion.

Even Murray, in his stoic and dispassionate manner, understood that his victory meant a lot to all those who were watching: “That win was for myself but I also understand how much everyone else wanted to see a British winner at Wimbledon.”

“I hope you guys enjoyed it.”

We most certainly did. Let’s see if there’s more.