The Imam From Shandong 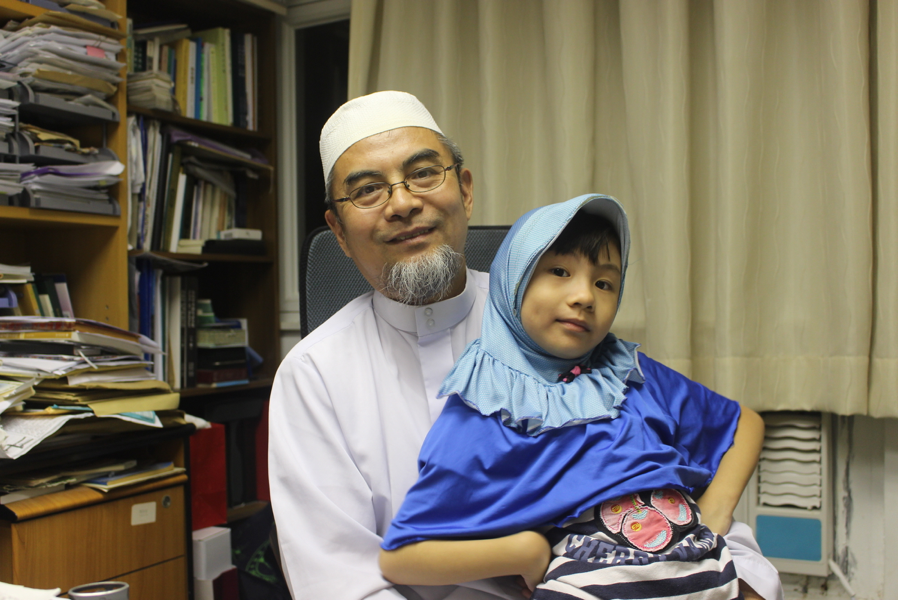 This was my submission for my feature writing class published in Oct 2017. The piece is not to be distributed as I did not get clearance for the quotes from the Muslim Council despite repeated requests. I’m keeping it here as part of my portfolio.

HONG KONG — Near Wan Chai road, before the collection of colonial bars, neon lighted clubs and restaurants frequented by hostesses giving an impression of hedonistic abandon, an imam preaches the religion of the prophet.

Despite being in a city where Chinese form the majority, it is unusual to see a Chinese imam. While a majority in the city practice some form of Buddhism, the city is better known for its Christian presence, a vestige of a time when it was under British rule. Imam Uthman Yang Xing Ben is one of only two imams of Chinese ethnicity in the city and he bridges cultures and languages.

Uthman is a minority leader within a religious minority. The opening up of the economy made it possible for a young man from a remote village in East China to become a religious leader, acting as a link between ethnicities and as a countervailing force to the alienating pressures of life as amigrant.

Not like that matters to Farida, his six-year-old daughter, chattering to herself and sliding along on a plastic push cycle.

At his eighth-floor corner office on a Saturday afternoon in September, Uthman, 53, was busy reading on an old computer, a rare concession to technology in a room filled with documents, folders, religious books, pamphlets, brochures, newspapers and other remnants from an era that began before the Internet.

Dressed plainly in a white kufi and salwar kameez, Uthman, who speaks in English in a high-pitched, friendly voice that crackles with joviality, was happy to get a chance to share his story.

“I came to Hong Kong in 1993. It has been more than 20 years. That means I have been an imam for more than twenty years,” he said proudly.

The middle of five children from a village in Shandong province where nearly half a million Muslims reside, Uthman is part of the Hui ethnic grouping of Chinese who are primarily the descendants of Silk Road traders closely related to the Han majority.

Islam is even popularly called the religion of the Hui, according to Sulaiman Wang, the other imam of Chinese heritage in the city. Wang hails from Taiwan and he says that the ‘Hui quarter’ or ‘Hui street’ are terms commonly used to refer to Muslim dominated areas.

Officials relaxed attitudes towards religion – the state officially recognized the freedom to practice Islam in the 1982 constitution – allowing Hui Chinese to migrate to cities both within and outside the border. After a stint at the Islamic Institute of Beijing, Uthman was recommended for further studies in Pakistan and obtained a degree in Islamic studies at the International Islamic University in Islamabad.

Being surrounded by non-Chinese people for the first time in his life, Uthman was overwhelmed but he took it in his stride and even learned Urdu along the way.

“I study in Pakistan so when I speak Urdu, they [Indians and Pakistani] very, very happy. They also very surprised. How come Chinese speak Urdu!”

Around the same time in Hong Kong, data collected by the Pew Research Center shows how the city began to add nearly two thousand Muslims every year to its population. Uthman was invited to what was then British Hong Kong by the local religious body in 1993 when there was “a small Chinese Muslim community.”

“For Hong Kong people at that time, they don’t know Islam,” Uthman said. “Even some reporter, they called Kowloon mosque a Hindu temple! They see the people who all look like Indian, Pakistani so they think that is Hindu temple!”

It amuses him now but life wasn’t so easy for Uthman back then. The small spaces, the language barrier and the difficulties in getting residency made him feel like an unwelcome visitor. Acquiring permanent residency after the 1997 handover, Uthman married a Hui woman from Hebei after becoming an imam.

“I teach in Arabic [then]. Later on, I also teach in Mandarin. Because Hong Kong returned back to China, so many people interested to study and learn through Putonghua [Mandarin],” he said. Hearing a voice in one’s mother tongue is a rare pleasure that Uthman understands only too well. While he hails from China, he remains a migrant at heart. For the Hui in Hong Kong, he is a link to home.

Soon after, he was also appointed to the board of trustees and tasked with halal certification duties.

The label of an outsider hovers uncomfortably in the background of the lives of many Muslims in China. Footage that emerged just last month showed dozens of Muslims attacking a highway toll station in Tangshan over alleged mistreatment of a local cleric illustrating how being a Muslim is difficult in China.

Uthman’s presence as an intermediary has been important but not one he likes to boast about. He is regularly brought forth on public occasions by Mufti Arshad, the chief imam of Hong Kong.

As he closed his eyes and raised his hands to heaven when leading a congregation in the green-carpeted prayer room later in the evening, muscles shifting to a time-worn pattern kneeling and rising up in turn, facing the distant Mecca (Muslims pray in a westerly direction four times a day) while reciting the Quran, his voice, remarkably, switched to nearly perfectly accented Arabic.

Two dozen males whispered his words in unison. Only two Muslim men were Chinese citizens at Masjid Ammar that evening. All of them trusted in the voice which carried the necessary spiritual devotion, the precise Arabic enunciation and the rhythmic melody that brought them closer to god.

“You understand?” is a phrase that often punctuates Uthman’s sentences.

To all those assembled, including the boys peeking out nervously to check whether their ardor was well received, Uthman represents a voice that helps people comprehend how it is possible for the modern world to embrace what it might not readily understand.

As we returned to his office, Uthman proudly listed the five languages he was fluent in – Arabic, English, Urdu, Cantonese and Chinese. “Putonghua,” mimicked his six-year-old daughter in a soft, inimitable voice. Noticing the tyke’s presence, a distracted Uthman got busy trying to set her spindle blue hijab in place only for the younger of his two daughters to squiggle out of his control.

The imam let out a chuckle. Whether in Pakistan or China or Hong Kong, some roles will always be difficult to master.

At least for two decades, Uthman appears to have suitably accomplished the role of an imam.