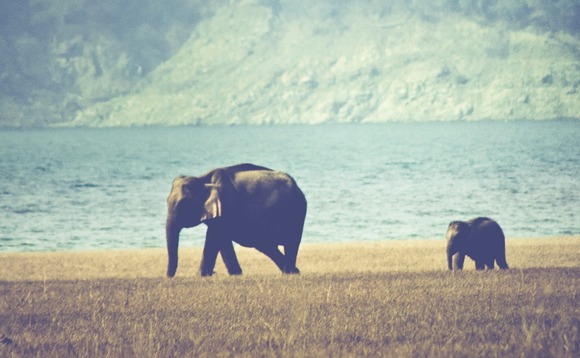 This was a 2,000-word feature for AVCJ focusing on Indian private equity firm Gaja Capital that supports mid-market businesses with domestic revenues.

Ranjit Shah, a managing partner at Gaja Capital, has a soft spot for the whisky produced by John Distilleries.

Back in 2011, they had convinced the company founder to work on a twofold plan: create an upmarket brand called Paul John that would win awards abroad and abandon bottled packaging for Original Choice, a mass-market product. Doing so would have reduced the cost of logistics and Original Choice could be sold in tetra-packs – much to the amusement of its clientele – and expand to nearby states quickly.

“We got a 94.5 rating [for Paul John] in Jim Murray’s Whisky Bible [an annual publication], which makes it as good as Japan’s Yamazaki,” he says.

They even added the taste of chilies to give Original Choice a punch. “When the Indian consumer drinks it then he says, ‘Kuch laga!’ [it feels different!],” says Shah. As a result of such moves, EBIDTA increased by 5x over the eight-year holding period. Salzerac, a US-based spirits maker, bought out Gaja’s minority stake in 2019, giving the GP a handsome return on what was an initial outlay of INR750 million.

The company’s founder, who is also called Paul John, has now joined the Gaja team as an operating partner. An American citizen who returned to the country of his birth to launch the Goa-based company in 1996, John represents the typical first-time entrepreneur Gaja likes to back. Usually without links to wealthy families, these individuals run profitable companies looking for growth capital and are amenable to operational input.

Previously specializing in minority growth deals, Gaja has gravitated towards control transactions in recent years. According to a local investment banker, this makes sense given the difficulty in forcing exits. Meanwhile, increasing fund sizes mean Gaja can write larger checks, but there is still a willingness to participate in consortiums. These must be “high touch” and “shared control” deals with the investors in the driving seat.

It’s a strategy that has worked out well for the firm. The $180 million sophomore fund that had invested in John Distilleries has achieved three other full exits – from staffing business TeamLease, RBL Bank and EuroKids International, an operator of pre-K and K-12 schools. A third fund of $240 million was raised in 2016.

Now Gaja is seeking $400 million for its fourth vehicle. The team is confident of continuing the trend of fund size increases despite COVID-19 disruptions. Consumer, education and financial services will once again be the key areas of focus, but new verticals are being explored.

Elephants are widely celebrated in Indian culture. Ganesh Chaturthi, an annual festival celebrating an elephant-headed god, is a regular feature of the national calendar. It took place last week albeit at a lower tempo.

Gaja means elephant in Sanskrit. The firm was co-founded by Shah and Gopal Jain, the other managing partner, with a view to creating a GP that was authentically Indian but brought US-style private equity management to a country where capital providers for mid-sized businesses rarely showed up more than once a quarter.

The 2008 financial crisis was a decisive moment. For nearly two years, Gaja did not invest and debated switching to a public markets strategy because private companies did not want to sell at a discount. The patience displayed by the firm to stay the course as a private equity investor echoes the animal that it is named for.

As economic activity recovered, Gaja became involved in a management buyout for RBL, a “sleepy” Kohlapur-headquartered bank. They brought in Vishwavir Ahuja, a former CEO of Bank of America in India, to lead the business. This came at a time when India’s central bank was hesitant to give out banking licenses.

“As much as you could launch a new bank with an old license, that was what we were doing at RBL,” says Jain. Gaja was ready to foot the bill if the regulator refused the CEO pick. It was a leap of faith the team felt they had to take to establish themselves as a serious investor. In any case, the era of pre-IPO investments, a common approach in the 2000s, was fast coming to an end.

RBL’s headquarters was relocated to Mumbai and new capital was plowed into a rebranding exercise, launching new branches, and technology. A high-quality board was assembled, and Jain stayed involved until the bank completed an INR11 billion IPO in 2015.

“We’re pretty impressed with what they’ve done with banks – RBL or others. [Jain’s] not one of those pure advice guys giving ‘gyaan’ [wisdom]. He gets his hands dirty and he has a very pointed and astute understanding of the financial services sector,” says Gaurav Deepak, CEO of Avendus Capital, a local investment bank. Avendus invited Gaja to join one of its funding rounds in 2017 because it liked Jain’s passion. 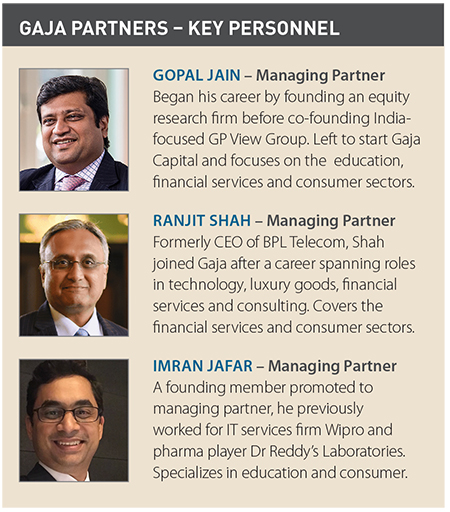 An affable civil servant’s son and also an amateur historian, Jain speaks slowly and deliberately. He is well regarded by Gaja collaborators and his geniality has stood the firm in good stead.

Jain previously co-founded View Group, an India and US-headquartered GP that launched two of the first India-focused VC funds. However, it was primarily looking for companies with US dollar revenues. Jain has a patriotic streak and earnestly felt there was a gap in the market for a PE firm dedicated to mid-sized businesses with domestic operations. Gaja’s partners had a significant minority stake in Fund I and local entrepreneurs appreciated their drive.

“I had gotten tired of these tourists who would get on a plane and come to India and then leave. I wanted someone with a dial tone,” says Manish Sabharwal, co-founder of TeamLease, the country’s largest staffing business that powers many of the convenience-focused start-ups in the country. “They are consistently warm rather than hot or cold.”

Initially reluctant to partner with Gaja, Sabharwal accepted an investment in 2009, mainly because he wanted operational support. It was his second time partnering with Jain in a decade. The pair recently completed a series of video lectures promoted by Ashoka University on the “Makers of Modern India.” Sabherwal is also an investor in the firm’s management company.

Despite Jain’s profile, Gaja is not centered on one person’s ambitions. The RBL deal coincided with the launch of the firm’s leadership program and the creation of a network of operating partners that bring experience from a number of industries. “I take pride in the fact that we’ve promoted associates into partners,” adds Jain.

Shah and Imran Jafar, a former intern at View Group, bring their specific skillsets to the table. Jafar, now a managing partner, has impressed Prajodh Rajan, the co-founder of EuroKids International. With a background in human resource training, Jafar embraced the opportunity to find suitable education investments that have now established the company as a serious player in the sector.

Jafar convinced Rajan of the need to take a serious look at EuroKids’ safety policies. The company hired a chief safety officer, designed new safety rules on infrastructure, transport and personnel, and co-wrote a safe schools protocol for India that was well received by parents and education officials alike.

A culture of safety is now embedded across the 1,000-school chain. Rajan is confident the entire network can come back online within two weeks when regulators allow the resumption of offline classes. Most schools in India are closed right now due to the ongoing coronavirus pandemic.

“I couldn’t thank them enough for having talked me through that processes, which has helped us keep a distributed network of preschools and K-12 schools safe,” says Rajan. Meanwhile, Jain convinced him to shutter operations in the Middle East and focus on India.

Jafar and his colleagues advocated various other measures that ensured consistent annual growth, setting up the company for an acquisition by KKR last year. EuroKids now has a backer willing to invest in inorganic acquisitions aimed at expansion across South Asia.

Meanwhile, the older Shah has accumulated more than 30 years of work experience across banking, consulting, telecom and entrepreneurship. He brings a sense of gravitas that Jain terms as the “CEO mindset.” The trio work like entrepreneurs, collaborating closely with CEOs and founders of portfolio companies. “Wherever we were not in a position to be high touch, we did not get great results,” says Jain.

During Gaja’s ownership of Educational Initiatives, a Bengaluru-based provider of online assessment solutions, the frequency of engagement has increased. There are monthly meetings, weekly catch-ups, a five-year operating plan reviewed annually and close support provided by Sridhar Ganesan, a human resources specialist who acts as the in-house “chief people officer.”

“He just picks up the phone and calls anyone on my leadership team. It’s value accretive and I discover some of what he has done after the fact,” comments Srini Raghavan, co-founder of Educational Initiatives. Gaja has accelerated the professionalization of the company by bringing in various executive-suite members, thereby freeing up Raghavan’s time for long-term strategy.

Beyond the sweet spot

Gaja’s third fund is nearly fully invested. Should the successor vehicle come in larger, Deepak of Avendus expects active management and control deals to become more commonplace. In some ways, Gaja is currently overstaffed, he says, and need the work. The firm’s partners say they have increased headcount in anticipation of increased capital commitments.

Gaja will need to write larger checks because mature companies are emerging from the venture capital ecosystem and the founders are more ambitious than their predecessors. The firm must also face up to more significant competition beyond its market sweet spot. With investments of $25-40 million, Gaja’s deals are too large for venture capital players and too small for the likes of TA Associates, Kedaara Capital, and ChrysCapital Partners.

“They’re not competing with the global guys. It’s not even in the VC space [with loss-making start-ups] where they want to participate. It’s early growth private equity,” says Deepak.

Jain suggests there could be twice as many full control deals in the new fund as in its predecessor. A decade of minority investments with that high-touch mindset ensures the firm is prepared. In addition to Educational Initiatives, Fund III holds a majority stake in SportzVillage, a provider of integrated sports management services to schools and corporates. Gaja is also looking at technology solutions providers more seriously.

“You can see the tech-ization of India in our portfolio – education has become edtech, consumer has become consumer tech and financial services has become fintech. It may not always be the case, but technology plays a part in some form,” says Jain.

Mastering this transition will require a different mindset and new skillsets within the Gaja team. Operating partners with relevant expertise are already being recruited with a view to working on healthcare technology and enterprise technology deals. At the same time, the firm recognizes that its success in education has yet to be matched in other sectors. John Distilleries wasn’t an education play, but an exit came after eight years.

Ultimately, Gaja’s fortunes might be entwined with the broader development of the Indian consumer story – and it will take more than one fund cycle for this potential to be realized. Nevertheless, as long as India remains a consumption-driven economy, there will be diamonds in the rough, explains TeamLease’s Sabherwal.

“I think it’s the China contrast that always drives people crazy. We may never have 40% of our GDP coming from exports,” he remarks. “Gaja’s positioning as a local homegrown firm with a stable team that understands India and is there for the long run is a treasure worth preserving. The next 10-20 years is when that down-payment or that capability is going to become an unfair advantage.”

Jain’s first job right out of college involved founding an equity research firm. His second entrepreneurial venture could be the one that defines his legacy.